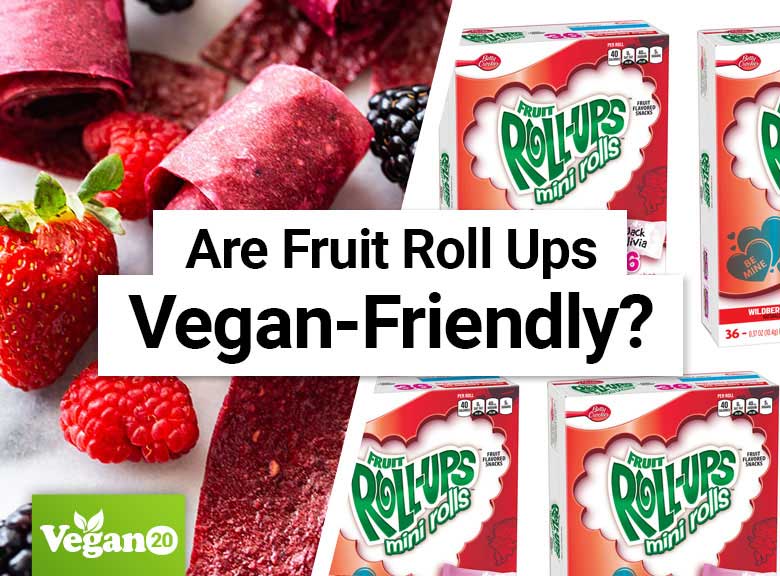 Could you go for some Fruit Roll-Ups right now? Then you’re probably wondering if they’re vegan-friendly.

The sweet fruit snack has been around since the 1980s. It was initially presented as a healthy fruit snack but had very little fruit in them. This was quite shocking to customers. Fruit Loops even faced a lawsuit because of their strawberry flavor. The packaging had pictures of strawberries on it, but the ingredients had absolutely no fruit. The problem was fixed by General Mills agreeing to remove the strawberries from the packaging. They also apologized for being misleading.

So it’s not the best option for a healthy snack. But can it help out a vegan’s sweet tooth? Continue reading to find out.

Fruit Roll-Ups are vegan-friendly as they have no sources from animals.

What Are Fruit Roll-Ups Made Of?

Why Are Fruit Roll-Ups Vegan?

Fruit Roll-Ups used to be made of only corn syrup artificial flavorings and fruit flavorings. But in 2017, three years after the lawsuit over the strawberries, General Mills re-introduced fruit roll-ups as a wholesome snack with fruit as one of the major ingredients. They’ve also stated that it contains no artificial flavor and is gelatin-free.

Gelatin is often used in candy to give them a stretchy texture. It isn’t vegan-friendly though because it is made from boiling the joints and ligaments of animals. Fruit Roll-Ups leaving this ingredient out of their snacks gives it added points in the vegan community.

There are a few concerning ingredients included in the snack, however. Vegans who fight against animal cruelty will find it uncomfortable to eat a fruit snack with ingredients that have indirectly distressed tropical animals. The ingredients are palm oil, Red40, and Yellow5.

The mass production of Palm Oil has cost many tropical animals their homes and endanger their livelihoods. Red40 and Yellow 5 are among some of the dyes that need to be FDA approved before their use in human food.

Fruit Roll-Ups are vegan-friendly as they have no ingredients that come from animals. For the vegans that have issues with animal cruelty, the dyes and the palm oil contained in the snack will be concerning so take note that they’re in there.

For more information in Fruit Roll Ups, check out this link.