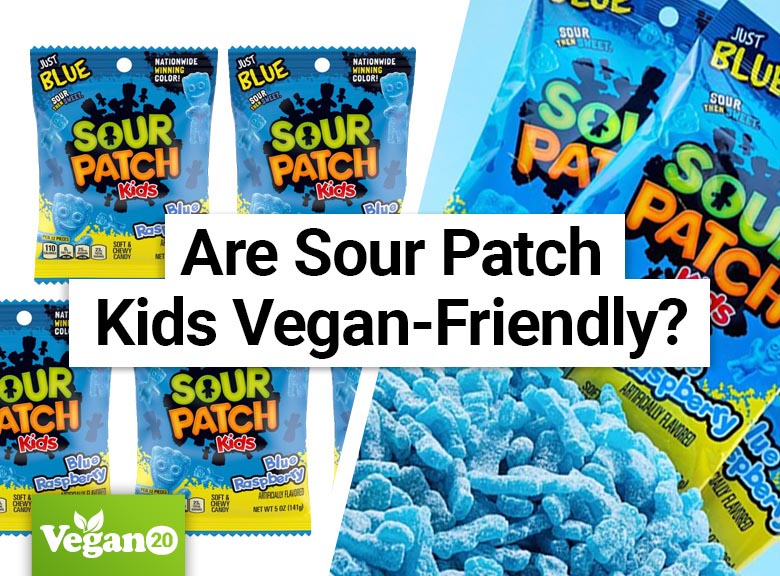 Sour Patch Kids, also known as “Very Bad Kids” are soft sweets with the slogan, “Sour. Sweet. Gone”.  They change taste the longer they’re in your mouth from sour to sweet.

The candy, named after the “Cabbage Patch Kids”, was first produced in the 1970’s. They are coated with invert sugar and sour sugar for their sour to sweet effect.

The original six flavors range from Lemon to Blue Raspberry.  The candy is popular all over the world including the USA and the UK.

As a vegan, you’re probably wondering if you can enjoy Sour Patch Kids. Let’s find out…

The Answer is: No

No, believe it or not, Sour Patch Kids are not vegan friendly. The cane sugar bleaching process and some of the artificial coloring ingredients, which are usually tested on animals are not vegan.

What is Sour Patch Kids Made Of?

Sour Patch Kids Original are made from the following ingredients:

Why are Sour Patch Kids Not Vegan-Friendly?

The bleaching process for white cane sugar involves bone char, which is made from cattle bones. Also, the colors Red 40, Blue 1, and Yellow 5 & 6 are artificial colors. Artificial food colors are tested on animals.

Veganism is against animal cruelty, and ingredients that involve animal testing are not considered vegan.

One particular source, People for the Ethical Treatment of Animals (PETA) has listed the sweets as vegan-friendly in their list of popular vegan snacks however, the listed ingredients actually prevent the candy from being vegan.

To find out more about Sour Patch Kids, head to the official website here