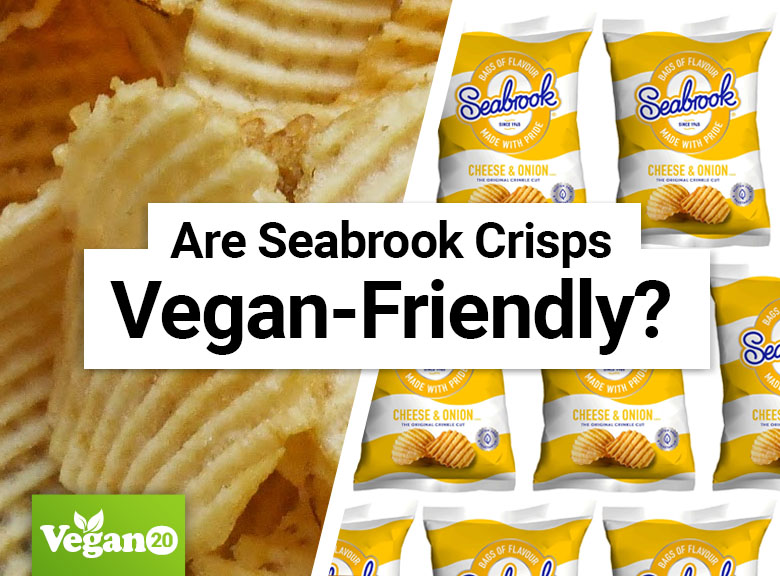 Seabrook Crisps are a UK-based brand of crisps. The story of Seabrook Crisps is rather an interesting one and began in 1939 when Mr. Charles Brook went to pick up his photos, he saw that the shopkeeper had mistakenly labeled them as ‘Seabrook’ rather than ‘C Brook.’ So when Charles originally started his fish and chip restaurant in Bradford, he named it Seabrook.

In 1945 When Charles’ son Colin returned from the Navy, they realized that they could expand the uses of the basic potato by using their fryer. Seabrook Crisps was founded in order to produce the first crinkle-cut crisps in the United Kingdom. Since then, Seabrook Crisps has grown to a large brand with a variety of flavors.

You may be wondering if these crunchy, flavored crisps are vegan-friendly. Continue reading to find out.

As previously mentioned, Seabrooks Crisps are available in a variety of flavors and some of those flavors are vegan-friendly. The vegan-friendly crisps are Sea Salted, Sea Salt & Vinegar, Prawn Cocktail, and Beefy.

Why Are Seabrooks Crisps Vegan-Friendly?

and flavorings as ingredients. These three ingredients are not always vegan-friendly. Bone char, which is created from animal bones that have been burned at extremely high temperatures until they produce a powdered product, is commonly used in the sugar filtration process. Because of the interaction with bone char, sugar made this way is not vegan. However, because these crisps are vegan, we can safely assume that the sugar used in the production process is vegan as well.

Good news to all vegans, Seabrook Crisps are in fact vegan-friendly! Well, at least some flavors are anyway. This is because these flavors do not contain any animal byproducts. We are always so pleased to come across a brand that caters to the vegan diet. So if you are looking for new crisps to try out, Seabrook Crisps are a safe option, as long as you take note of the flavor before purchasing it.