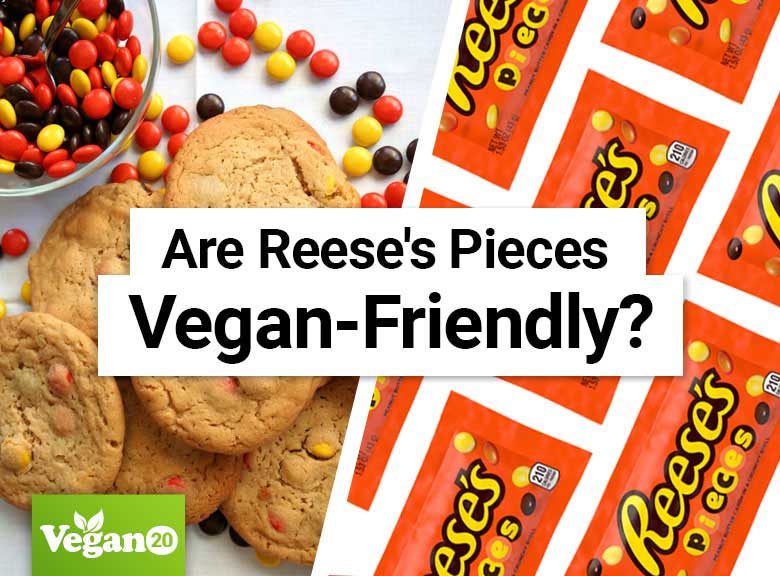 You might be wondering if Reese’s pieces are vegan-friendly.

Who can blame you? After its appearance in a scene of E.T. the Extra-Terrestrial in 1982, sales of the peanut butter- chocolate candy went through the roof. Everyone wants a piece. It is especially popular around Halloween time because of its color.

Half of the sales of candy in America for Halloween come from Reese’s pieces purchases. It’s not hard to see why the vegan community needs answers. Are Reese’s Pieces vegan-friendly? Continue reading to find out.

Unfortunately, you’ll have to search for another Halloween favorite. Reese’s Pieces are not vegan-friendly. They have even written on their website that while their sauces and toppings are vegan options, “all other Reese’s products are not vegan.

What Are Reese’s Pieces Made Of?

Why Are Reese’s Pieces Bad for Vegans?

Reese’s Pieces contain ingredients from animal sources. One of the ingredients found in the candy is milk. Milk of course is a by-product of cows and other animals. This makes it unsuitable for vegans.

Another ingredient that’s not fit for vegans is the resinous glaze. Brace yourselves for this one. Forbes describes the resinous glaze as being the secretions of an insect called the Kerria Lacca. It is what is used to create the glaze over Reese’s pieces. This means that the candies are not free from animal cruelty.

Speaking of animal cruelty, Reese’s Pieces also contains palm oil, Red40 dye, and Yellow 5 dye. These ingredients are especially not vegan-friendly to those who fight against animal cruelty. Palm oil production has cost many animals their homes in the tropics. As the production increases, deforestation increases. Animals like the orangutans are then left with nowhere to go and become endangered.

The Red40 and Yellow5 dyes are also not cruelty-free. These dyes have to be FDA approved onto be used in food. Healthline advises that the tests that approve these dyes are done on animals. Unfortunately, they are later euthanized.

The Reese’s Pieces candy is fit to be Halloween treats as it turns out it’s the scariest story ever told to vegans. It’s best to avoid eating this candy if you’re vegan. It has animal by-products and three of its ingredients are not free from animal-cruelty. Rest assured though that there are many vegan treats out there and we’ll help you find them.