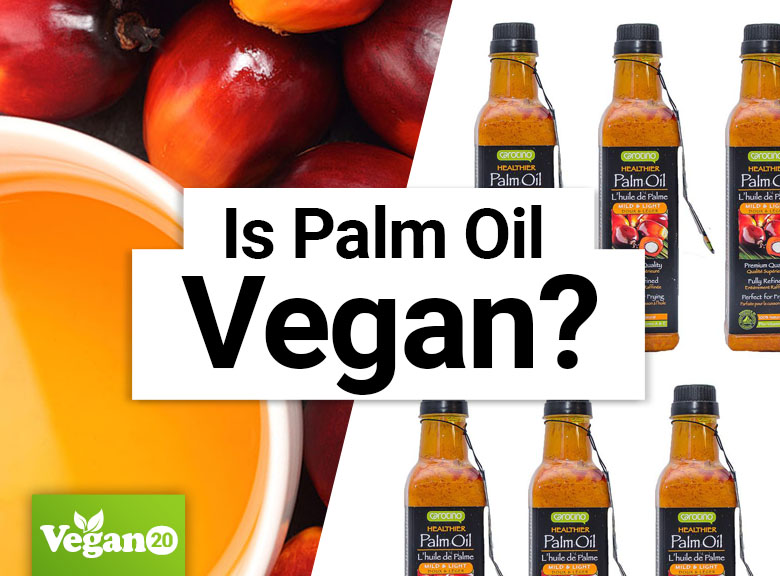 Understanding and educating yourself on the components of your daily products is important in order to maintain a vegan-friendly diet, but as easy as this may sound, there are several factors to keep in mind when making our dietary choices.

Palm oil is probably one the most discussed food components, and currently has been at the core of many debates over what qualifies as “vegan-friendly”

So why is palm oil so controversial? And is palm oil vegan at all? In this article, you will find out everything you need to know about palm oil also known as palm fat and palm kernel oil

What Is Palm Oil?

Palm oil is a plant-based oil that comes from the fruit and seed of palm trees. Palm oil production is the second largest of the edible vegetable oil industry, the first being the production of soy oil. Widely popular because of its taste and versatile properties, palm oil production has rapidly increased over the past three decades.

There are two types of palm oils: The first one, crude palm oil, is obtained by squeezing the palm tree fruit. The second type of palm oil is called Kernel palm oil and it is produced by crushing the stone – or kernel – that is located in the middle of the fruit.

Where Does Palm Oil Come from?

Palm oil comes from palm trees, their fruits, and their seeds. Originally from the African continent, palm trees were introduced to other parts of the world through intercontinental trade during the 18th century, mainly by European traders and settlers who traveled the world.

Today, palm trees are the symbols of remote coastal paradises like The Caribbean sea and compromise a large portion of the biodiversity of tropical rainforests in all continents, including SouthEast Asia.

Although palm trees spread across multiple countries and regions, the leading players of palm oil production are Malaysia and Indonesia. Together, both countries produce 85% of the palm oil that is introduced to the global markets. (Plant Based News, 2018). Over the past few decades and also as a result of the economic boom in these countries, the production of palm oil has increased an average of 400%.

Although we already mentioned above that palm oil originates directly from the palm tree fruit, while palm kernel oil comes from the kernel – seed – of the fruit, the differences don’t stop there.

Palm Kernel oil is heavily saturated, which makes it a negative source of nutrients in terms of health, and can represent a serious health risk, especially for people with antecedents of heart disease or that already struggle with this.

While palm oil is not as heavily saturated, its constant consumption does represent a health concern. Still, eating palm-oil-based products occasionally can actually provide some benefits, as it contains carotenoids that could contribute to an overall better health.

What Is Palm Oil Used For?

Palm oil is everywhere – From your everyday care products to your favorite chocolates and treats. Palm oil is said to be present in an estimate of 50% of packaged foods sold on supermarkets (Totally Vegan Buzz, 2018). This percentage tends to rise in developing countries like Kenya and The Philippines and goes down in developed countries with more strict consumer protections like the United Kingdom.

The products you most likely will find palm oil in are:

So now we know palm oil is fairly popular and used in the industry. But is palm-oil vegan? Let ‘s find out…

Answering this question depends entirely on what you define as “vegan-friendly.” In theory, palm oil is vegan-friendly as it is a plant-based product, which means it doesn’t rely on abusing animals for its production and does not contain any animal-based ingredients. However, palm oil is acquired by the cutting down of palm trees, and the total disruption of diverse habitats located in palm oil plantations.

In fact, palm oil production is one of the leading global causes of deforestation and the destruction of entire ecosystems. Because palm oil production is centered mostly in Indonesia and Malaysia, the rainforest deforestation caused by this activity has pushed several endemic species to the verge of extinction and has contributed to the illegal animal trade market of these animals.

Why Is Palm Oil Not Vegan?

Palm oil production is the leading cause of rainforest destruction and the loss of habitat of several endangered species, many voices within and outside the vegan community argue that palm oil is not vegan.

Not only has affected the population sizes of SouthEast Asian animal species like the Sumatran orangutan and the Sumatran elephant, but it has also introduced illegal traders and poachers to these habitats, as the lack of government presence and the notion of animal rights allow them to hunt down these animals for their own profit. These illegal environments have also contributed to a raise of organized crime and the use of child labour in communities that were already widely stricken by poverty.

Palm oil production is also contributing to the worsening climate change, as it requires the use of destructive machinery and eliminates diverse rainforests that currently produce up to 20% of the Earth’s oxygen.

The WWF has introduced a way to rate food-production companies on their palm oil rules and production. Other pages, like Ethical Consumer, also conduct their own reports on what companies use the most palm oil and how they produce it. Recently, brands like Nutella and companies like Nestle have come under fire for not adopting sustainable measures that ensure the protection of protected habits.

Alternatives To Palm Oil: What Oils Are Vegan-Friendly?

Users who want to avoid using products that contain palm oil can easily do so. There are plenty of edible plant-based oils, such as sunflower oil and soy oil. Still, if you want to have an oil that has similar benefits to the ones that palm oil offers, coconut oil and babassu oil share very similar properties and are significantly healthier than palm oil and palm kernel oil.

These vegetable-based oils are also considered fair trade, as they provide international trading opportunities to producers from developing countries and do not require the use or presence of animal abuse in any form.

Consumers who still want to use palm oil or foods that contain it can choose to buy products that are RSPO certified. RSPO or The Roundtable of Sustainable Palm Oil is a third-party organization that was created to address the environmental and ecological concerns raised by the palm oil industry. They introduced and popularized Sustainable Palm Oil, which is produced by eco-friendly practices and whose overall goal is to protect the rainforest and the hundreds of species who live in it.

If you want to avoid palm oil overall, you can easily check the product’s labels to see if they contain palm oil (and any other components that may involve animal cruelty) If you are unsure about a certain product or have concerns over their transparency regarding the use of palm oil, you can also check the information available online about that specific product.

Should I Avoid Palm Oil?

The decision to cut off palm oil from your diet is totally up to you. Avoiding palm oil can be difficult, as it is present in most of our packaged goods and it has become widely popular during the last decade. Still, If you are concerned about the environment and want to have a diet that is enterily free of animal cruelty practices, avoiding palm oil would be the right call.

The production of palm oil not only involves the endangerment of vulnerable animal species and the destruction of tropical rainforest that are vital in order to fight climate change, but also promotes the presence of illegal activity that thretens local community and produces a market for child labour.

Not everything is negative, though. There are plenty of cruelty-free, vegan-free, and fair trade options out there. Also, sustainable palm oil also offers consumers the same beneficial properties and flavor, while also ensuring production and trading practices that are sustainable and protect the environment.