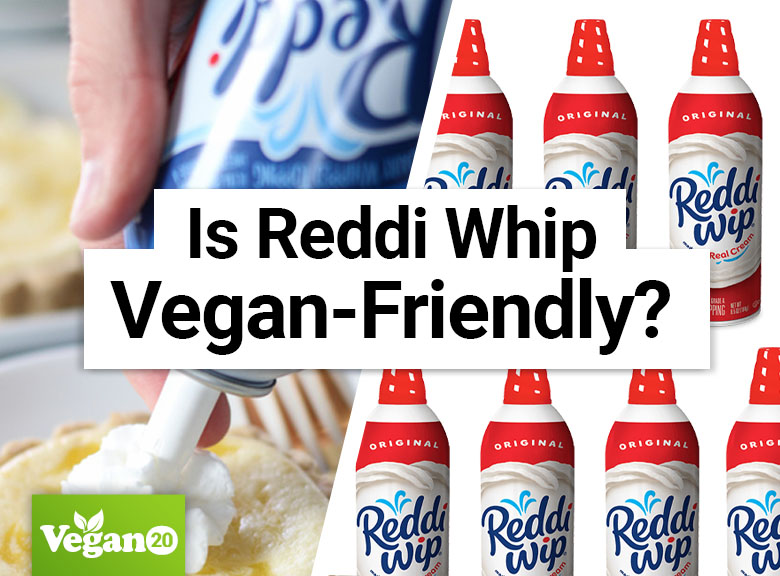 You might have thought the Reddi-Wip whipped cream you found in your pantry was just what your vegan cookies needed, but you might not know whether it’s vegan-friendly.

You’ll find whipped cream featured on top of cakes, sundaes, cookies, and most other treats. And if we’re being honest here we know we’ve squeezed a dollop straight into our mouths at one point in time. It’s just that good. But how good is it for a vegan diet? Continue reading to find out.

Reddi-Wip is not vegan friendly as it has milk, an animal by-product as an ingredient. This makes is unsuitable for vegans to eat. There is however a vegan-friendly version that uses coconut cream instead of cream from animal by-products.

What Is Reddi-Wip Made Of?

Reddi-Wip Original is made from the following ingredient:

Why Is Reddi-Wip Vegan-Friendly?

Reddi-Wip has ingredients that are made from milk. Cream is the higher fat layer of milk before its homogenized. As both cream and nonfat milk are by products of animals, they are not vegan-friendly.

The Reddi-Wip chocolate flavor contains cocoa butter which does not have animal-sourced ingredients. However, the mass production of cocoa butter has resulted in deforestation in tropical areas, destroying the natural habitats living in these areas. This forces them to leave their homes and are as a result exposed to danger. Vegans who are concerned about the welfare of animals should not consume products with this ingredient.

Don’t put back your desserts just yet, there is a vegan-friendly version of the whipped cream! This is called Non-Dairy Coconut.  The cream in this whip is made from coconut cream and it has no animal-sourced products.

While the original Reddi-Wip flavor is not vegan-friendly, they have a dairy-free coconut cream option that is perfect for vegans, especially those with that extra tropical sweet tooth. It helps to know that with every bit of it that you enjoy you’re supporting a company committed to protecting our environment from harmful plastic production. So, if you have a bottle of Reddi-Wip Coconut Cream, go ahead and spray a bit onto that cold sundae and enjoy!

For more info go to reddiwip.com