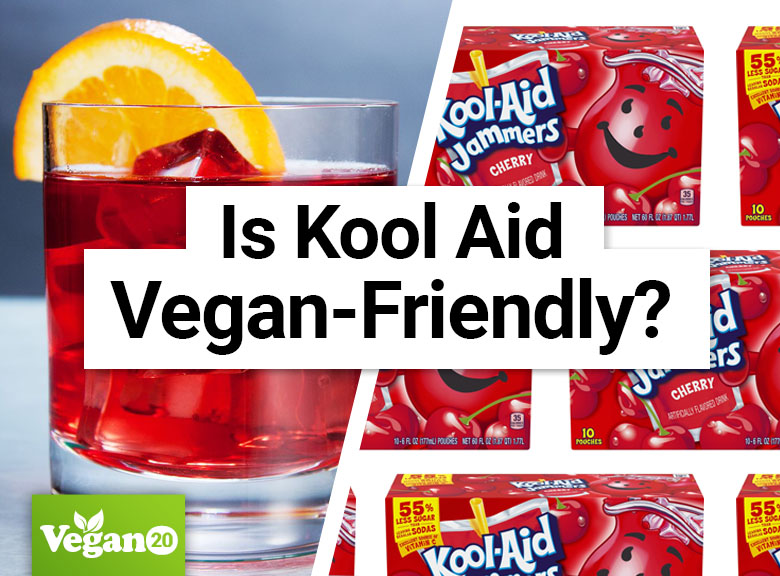 We have all heard of Kool-Aid. The sugary powder has been around for almost one hundred years, and several generations have enjoyed its fruit-like flavor and refreshing properties during the hot summer months.

Owned by Kraft Foods, Kool-Aid is even considered the signature refresher of Nebraska and has also played an influential role in popular American culture. Although Kool-Aid is mainly targeted towards young children, many adults also enjoy Kool-Aid’s tasty and nostalgic flavors. But is it vegan-friendly, or should you stay away from the colorful food? Well, let’s find out.

The answer is: YES

Although it may sound hard to believe, the popular powdery mix is totally suitable for vegans of all ages. For many years, it was assumed that Kool-Aid contained gelatin, as many other colorful and sugary foods from the same time used it for a variety of reasons. Yet, no proof or indication points to Kool-Aid including gelatin or any other animal-based ingredients in its production.

What is Kool Aid Made Of?

Kool Aid is made from the following ingredients:

Why is Kool-Aid Vegan Friendly?

Kool-Aid has been around for many years. Before people started to be more concerned about the ingredients present in their everyday products, many brands followed harmful or questionable practices during the production process.

Kool-Aid, on the other hand, is what we can label as “Accidentally vegan.” While Kraft Foods never intended to make Kool-Aid an option for vegans, all the ingredients included in the substance, from dyes to additives, are vegetable derivatives and so don’t involve animal cruelty in any shape or form.

Still, it’s important to note that the vegan diet emphasizes a healthier, plant-based lifestyle. Kool-Aid may be vegan, but the powder is mainly made of sugar, synthetic ingredients, and chemical elements that don’t provide any source of nutrients and can be harmful to your health if consumed regularly.

If you are preparing for the high summer temperatures, you will be happy to know you can count on Kool-Aid for an easy-to-prepare and tasty refreshing drink.

The beverage has been around for many decades, and its accidentally vegan nature ensures it will adapt to the rapid lifestyle changes of the population. However, Kool-Aid can not be considered a healthy or organic option, and consuming it on a regular basis can be traced to high sugar levels that may pose a risk for your health.

For more information go to: https://www.koolaid.com