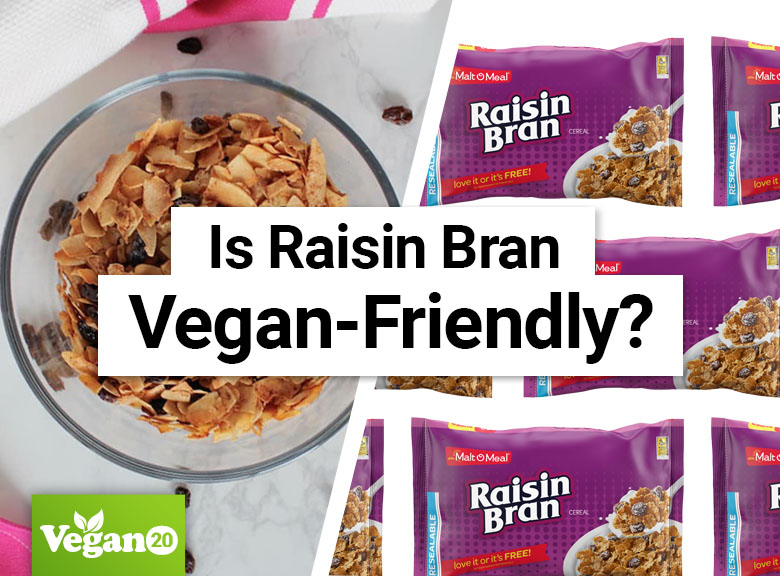 Are you wondering if Kellogg’s Raisin Bran is vegan-friendly?

This is a breakfast cereal that is made up of raisins and wheat bran flakes. The company offers a wide range of varieties, including:

Rasin Bran can be used as a great addition to salads and cookies. It can also be a great addition of fiber to smoothies. It is popular for its nutritional value. But is it popular with vegans? Continue reading to find out!

What Is Kellogg’s Raisin Bran Made Of?

Why Is Kellogg’s Raisin Bran Not Vegan?

Kellogg’s Raisin Bran, along with its variations, Bananas, and Cranberries, has one ingredient that is animal-sourced. This is the Vitamin D3. This vitamin is actually made from lanolin; the oil that comes from sheep’s skin. Sheep produces this oil to protect their wool. The oil is harvested by shearing the sheep’s wool and placed in a machine that separates the oil from other chemicals and debris. This makes the cereal unsuitable for vegans to eat.

That being said, not all vegans have an issue with Vitamin D3. Especially if you look  at the Nutritional Label. The percentage of the daily required value of vitamin D that the cereal gives you per serving  is listed  at 0%. For some vegans that makes it okay to have the cereal.

The other variation of Kellogg’s Raisin Bran, Toasted Oats and Honey, includes an ingredient that is also animal-sourced. You’ve guessed it, honey. Honey is made from plant nectar and the enzymes in bees’ bodies. This makes it an animal sourced product that is not fit for a vegan’s diet.

Kellogg’s Raisin Bran is not vegan-friendly. It has vitamin D3 which is animal-sourced. Some vegans will go ahead and have the original Raisin Bran as the amount of Vitamin D3 included in the cereal is very small. The Toasted Oats and Honey contain honey, which is also animal-sourced. Depending on your vegan values, you may or may not want to go ahead and have a bowl of this cereal. But strictly speaking, it is not vegan-friendly.