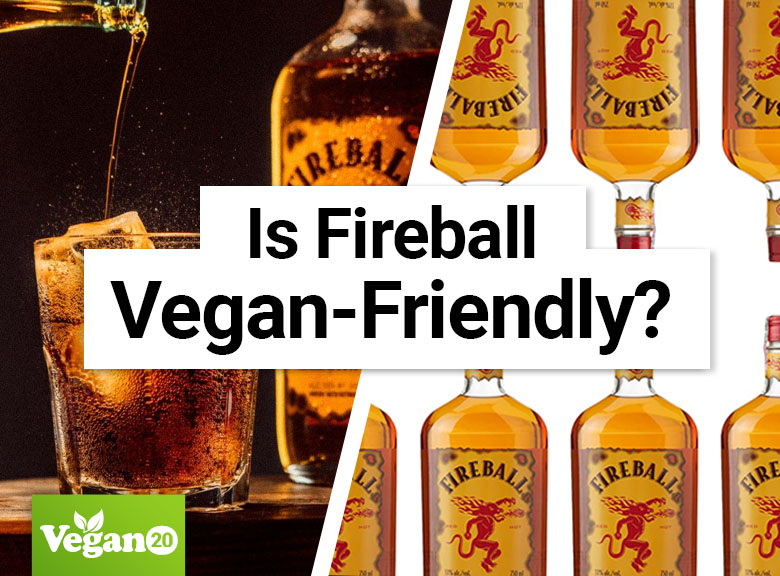 Fireball Whiskey is perhaps one the most popular – and controversial – whiskey brands out there. Produced by the Canadian-based Sazerac Company, Fireball is also available in the US and some European markets.

Over the past few years, it has become a symbol of cheap, strong drinks with high alcohol content. Its most consumed flavor, Cinnamon Fireball Whiskey, is a standard option during social gatherings and parties, but is Fireball Vegan-Friendly? Let’s take a deep breath and find out…

The answer is: NO

Unfortunately, Fireball Whiskey is not suitable for a vegan diet. According to a company’s spokesperson, Fireball has a vegetarian status, meaning it does not contain meat or derivatives.

However, it might contain ingredients that contain animal-based products such as honey or isinglass. At the same time, whiskey production may involve the use of filters or other substances made from animal ingredients. By now, you are probably wondering what exactly makes Fireball non-vegan and what animal ingredients are included in its production.

Why is Fireball Cinnamon Whisky Not Vegan Friendly?

The reason why Fireball is non-vegan appears to be undisclosed to the public. While the drink itself does not appear to contain significant amounts of ingredients of animal origin, it is believed that constant cross-contamination or questionable third-party practices make it impossible for Fireball Whiskey to claim a vegan status.

The company behind Fireball has also been involved in several disputes and prohibitions from countries concerned about the ingredients and chemical content of the famous whiskey.

Norway and Sweden even temporarily banned Fireball after it was discovered the drink had unusually high amounts of propylene glycol. Among alcohol consumers, Fireball is regarded as a relatively poor-quality whiskey option.

You may be disappointed to know Fireball Whiskey is not vegan. Although we still don’t know the reason behind this fact, if you want to remain on the safe side, we recommend you stay clear of the drink.

The good news is that there are many vegan-friendly alternatives out there, and while the whiskey may be popular among party-goers and young people alike, its chemical composition makes it a not-so-good option when it comes to the health risks already involved with drinking alcohol.