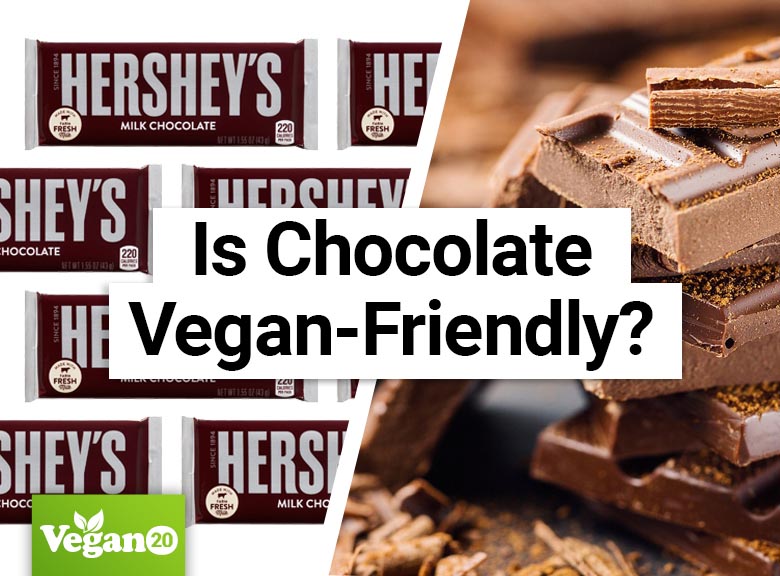 Chocolate is probably one of the most popular and commercialized foods, and through the years, it has become an essential ingredient in many traditional desserts and cuisines.

Loved by adults and children alike, there are countless brands of chocolates. This article intends to cover the most common chocolate types, discuss the overall health risks and benefits of chocolate, and conclude whether the tasty treat can be considered vegan (Or not).

Chocolate is a food substance that is achieved through the fermentation and roasting of cocoa seeds.

Although it is unclear where chocolate first originated, most historical accounts seem to agree on Mexico, where the Olmec civilization is said to have consumed chocolate-based beverages (Similar to hot chocolate) dating back to the 19th century BC.

During the colonization of the Americas, European merchants brought the sweet food over to Europe, where it gained popularity and became one of the most popular choices for the making of desserts.

Cocoa is crucial to the existence of chocolate. The seed is found across tropical rainforests along the equator, but most of the world’s cocoa production originates from West African countries like Ivory Coast, Ghana, and Nigeria. So if cocoa is the key ingredient of chocolate, does that mean chocolate is vegan? Well, not exactly…

Yes, chocolate is only vegan when its ingredients don’t include any dairy or animal-based products.

Cocoa comes from a tree and is not processed with animal-based practices, most people assume chocolate is vegan. But this is only true in some cases.

The chocolate you consume on a regular basis – That is, the one supermarkets and local stores sell – can contain additional ingredients that may not be fit for a vegan diet.

Why is Chocolate Vegan?

Chocolate can be vegan if its components and the processes involved in its production didn’t involve animal cruelty practices or products. The most common non-vegan ingredients found in chocolate are milk, butter, other dairy products, and the lecithin derived from eggs.

As discussed above, chocolate is only vegan when its ingredients don’t include any dairy or animal-based products. So should vegans avoid chocolate all together? Or are there specific types of chocolate vegan should get away from?

The 3 Main Types Of Chocolate

White chocolate: White chocolate, by definition, is not vegan. White chocolate combines milk and a significant percentage of that fat that includes milk fat, cocoa butter, and lecithin. Although organic food stores have come up with vegan substitutes for the snack, white chocolate remains largely non-vegan friendly.

Milk chocolate: Now, this may sound obvious, but milk chocolate does indeed include milk. As with almost anything else, the good news is that multiple vegan-friendly chocolate options have been released to the markets. These are produced by switching animal milk with plant-based substitutes.

What is Vegan Chocolate?

Vegan chocolate refers to all chocolate substances – From chocolate bars to chocolate powder – that are free from animal-based ingredients. Vegan chocolate can be found everywhere, but recognizing if chocolate is vegan or not can be a tricky task. So how can you know if the chocolate bar you are buying is vegan? Let’s find out!

How Do You Know If Chocolate Is Vegan?

Chocolate enthusiasts that embrace the vegan lifestyle frequently have issues finding treats that adapt to their diets. Because of this, it’s always advisable to start by checking the ingredient list at the side of food packages. The shorter the list, the more organic (and delicious) the chocolate is.

You can also find vegan options online by checking vegan websites that feature healthy and vegan-friendly options. The Women’s Health Magazine recently made a complete list of the best vegan chocolate bars, but simply by looking up the vegan stores located near your area, you should be able to find plenty of tasty and vegan chocolate options.

One thing that’s important to note is that, what might be vegan for you, might not be vegan for another person. While products like milk and eggs are intuitively not vegan, there’s a grey zone surrounding other components like white sugar, which often is made through the use of bone char, or cocoa itself, which has been associated with child labor in the developing countries where it is produced. If you want to make sure your chocolate is both cruelty-free and vegan-friendly, all companies have a phone number for customers to call with product inquiries.

The Health Benefits of Chocolate

Although chocolate has been linked to several medical conditions such as diabetes and obesity due to its sugar content, moderate consumption can actually provide health benefits to consumers. Recent studies have demonstrated that chocolate helps in keeping your heart and arteries healthy, and it can even reduce the chances of having a stroke by 29%.

Other reports have shown that cocoa consumption can even improve memory and cognitive performance among the elderly population (https://www.sciencenews.org/article/cocoa-antioxidant-sweetens-cognition-elderly)

Dark chocolate especially has proven to be beneficial when eaten moderately. Multiple investigations have indicated that dark chocolate can contribute to reducing heart disease risk, lowering high blood pressure, and it’s even a powerful source of antioxidants.

Chocolate is enjoyed by people from all around the world. Its distinct flavor and sweetness have made it one of the most beloved and popular among sweets and candies.

From the hot chocolate sold during the winter months to chocolate ice creams adored during the summer, chocolate has become so essential that it might be difficult to avoid.

If you want to continue eating chocolate but want to respect your dietary preferences, there’s still plenty of vegan options out there for you to enjoy. Still, it’s important to note that consuming too much chocolate can carry health risks, so moderation it’s always advised.