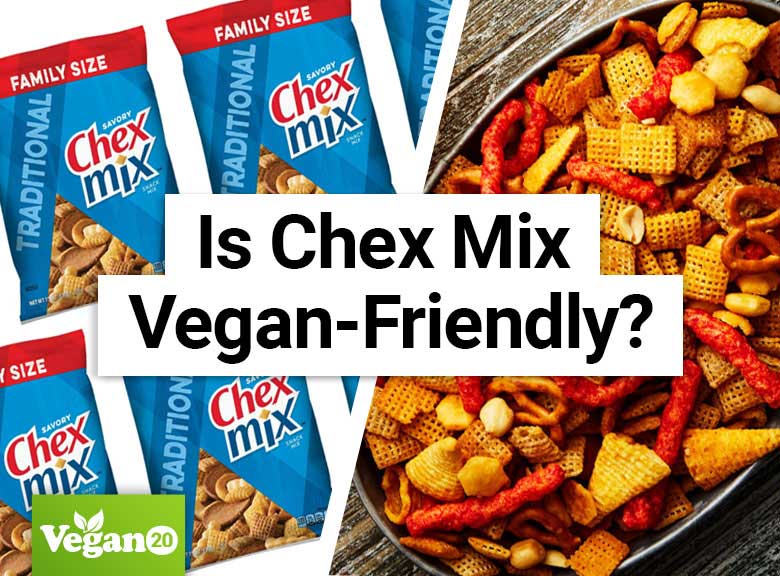 It’s a popular snack that many take and make their own! It’s eaten as a cereal, made in party mixes, and even used in lunch boxes. Are they vegan-friendly? Continue reading to find out.

Yes, Chez Mix is vegan-friendly provided you’re sticking to the traditional blend of Chex Mix or the Ghost Pepper flavor. They don’t have any animal sources included in most of their ingredients.

The other variants of Chex Mix are not vegan-friendly.

What Are Chex Mix Made Of?

Why are Chex Mix Vegan?

Yes, among the 14 Chex Mix flavors, The Traditional Mix and Ghost Pepper Chex Mix has no animal by-products which makes it safe for vegans.

We’ll tackle the ingredients in the other flavors that are not vegan-friendly, so you can know how to choose your next blend.

Chez Mix are not good for vegan due to the following ingredients:

Milk and its derivatives are found in most of the flavors, like the Chex Mix Bold. It contains dried Romano cheese, dried parmesan cheese and whey. Whey is the substance that remains after milk is processed into cheese. Since it’s a by-product of cows you’ll probably want to put this back at the snack aisle.

Bees use the enzymes in their body and mix them with plant nectar to create the sweet goo known as honey. Vegans of course believe that honey should best be eaten by the ones who made it- the bees! But it seems Chex Mix has taken a few drops here or there and have included it in their Honey Nut and Honey BBQ flavors. Since it’s an animal by-product we can’t have vegans chowing down on these flavors, now can we?

Companies don’t often disclose whether bone char is used to whiten the sugar in their products. For some vegans, it isn’t a problem at all. So, deciding whether to eat Chex Mix is really a personal choice.

We can invite Chex Mix to sit with us at the vegan-friendly table. Only the Traditional and the Ghost Peppers though. The others are not vegan-friendly as they have animal by-products. So relax and have a munch! Chex Mix is all right with us.