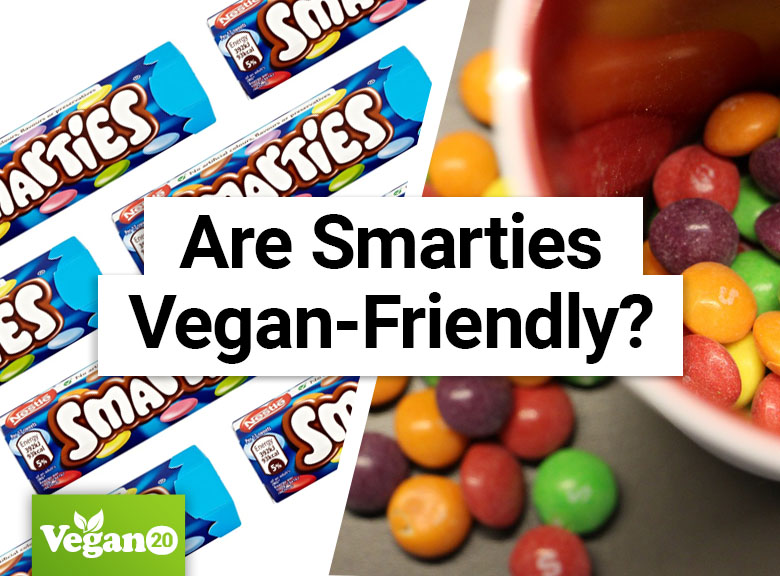 A long-time favorite in many countries including the UK, Germany, Australia, South Africa, and Canada. Initially named ‘Chocolate Beans’, the Smarties brand has held a special place in people’s hearts since 1937.

You may need a quick munch on some delicious, chocolatey candy but you may not be sure whether Smarties are vegan.

With their eight assorted colors of green, yellow, orange, mauve, red, pink, brown, and blue there’s no wonder why they have the attention of candy lovers everywhere.

What Are Smarties Made Of?

Why Are Smarties Chocolate Candy Not Vegan?

Smarties is not a vegan-friendly product because they include milk derivatives such as “milk ingredients” and whey powder. Since milk is an animal by-product and whey is powder is formed from the substance that remains after milk is processed into cheese, both ingredients are not fit for vegans to consume.

Natural flavor is also included as a Smarties ingredient. Natural flavors can either be made from plant or animal sources. However, Nestle, the owner of the Smarties brand, has not disclosed the source of their natural flavor. Strict vegans tend to avoid products that include this ingredient regardless.

Also, vegans concerned about animal welfare will have an additional reason to not eat Smarties. Cocoa butter is made from the cocoa plant. The harvesting of cocoa plants has been the source of large-scale deforestation in tropical countries such as West Africa. Deforestation has disturbed the natural habitats of several animals, forcing them to leave their homes and be exposed to danger.

Final Thoughts: Smarties Are Not Suitable For Vegans.

Despite not being suitable for vegans, Nestle has made some changes to the product that indirectly benefit the safety of animals.

In 2020, Nestle removed all artificial colors from Smarties globally, choosing to source coloring for the candy from natural sources such as “sweet potato, spirulina, turmeric, and beetroot.”

While artificial colors are not made from animals, they expose animals to cruelty as these colors are tested on animals to ensure they are safe for humans to eat. These tests often result in the euthanization of these animals as most experience fatal side effects from testing.

Despite this, Nestle Smarties are not suitable for vegans to eat as they contain animal by-products and other ingredients that harm animals. Rest assured though that there are plenty of chocolatey, vegan-approved candies out there for you to munch on!

For more information on Smarties, head over to the Nestle website here.