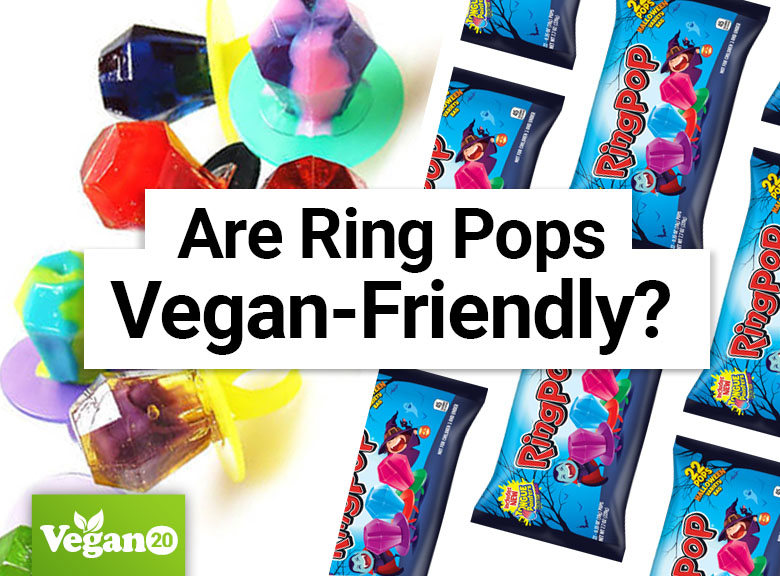 Ring Pops may be a sweet, convenient treat and the best bit of jewelry you’ll ever own, but is it vegan-friendly?

The sugary candy creatively places on a ring has been the favorite of so many children. Even adults indulge here and there to take a stroll down Ring Pop memory lane. The diverse flavors and colors keep them attractive and desirable. These flavors included:

But are they desirable on a vegan diet? Continue reading to find out.

The original variety of Ring Pops is vegan friendly as they have no listed animal ingredients in their product. Some flavors have natural flavors listed as an ingredient that may potentially be animal-sourced.

What is Ring Pops Made Of?

Ring Pops are made out of the following ingredients:

Why Are Ring Pops Vegan-Friendly?

Ring Pops are vegan-friendly because they have no listed ingredients that are derived from animals. Some flavors include natural flavors which can either be sourced from animal or plant-based ingredients. Topps, the maker of Ring Pops has not disclosed which of the sources they use. Stricter vegans tend to avoid products with this ingredient in order to avoid potentially consuming animal products.

Artificial colors and flavors are vegan-friendly as they are not made from animal ingredients. However, they expose animals to cruelty. These ingredients have to be tested on animals before they can be approved by the FDA as safe for humans to eat. These animals are later euthanized as they often develop fatal side effects from testing. If you’re a vegan who is concerned about animal welfare, then you should avoid products containing these ingredients.

Ring Pops Gummies contain gelatin which is an animal-derived ingredient. Gelatin is made from boiling the bones, tissues, and ligaments of animals in order to give products that chewy consistency that gummy candies usually have.

Ring Pops Gummies also include palm oil in their ingredients. Palm oil is vegan-friendly in that it is not animal-derived, however, the mass production of palm oil has caused deforestation in many tropical areas in order to make way for palm plantations. This disturbs the natural habitats for animals in these areas, leaving them homeless and exposed to danger.

Ring Pops are here to stay! While it may be a less than desirable proposal gift, they’re safe for vegans to eat.

Watch out for those gummies though, they are not free from animal sources.