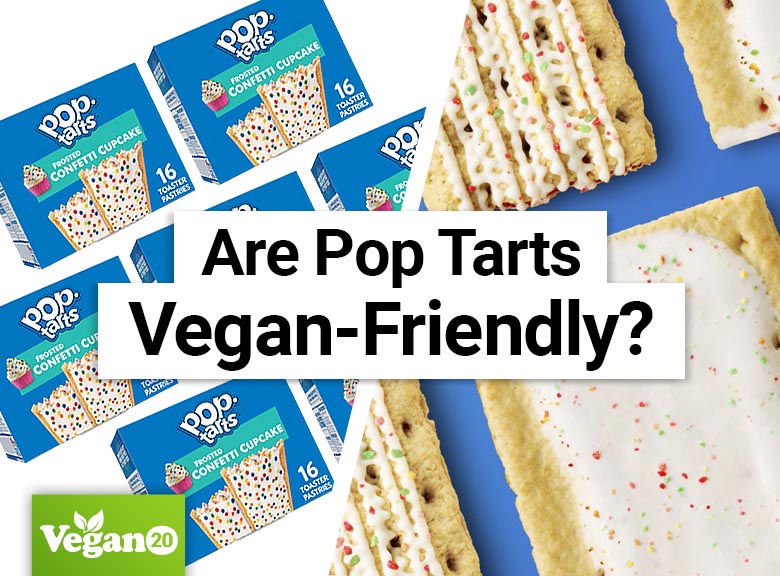 Pop-Tarts are toaster pastries by the American Kellogg company. They were originally called “Fruit Scones” but after Andy Warhol’s Pop-Art, the name changed. They were created as a reimagined toast and jam as a rectangular, toaster-ready treat.

The first Pop-Tarts were strawberry, blueberry, brown sugar cinnamon, and apple currant, and frosting, and this has expanded into dozens of other flavors including the popular frosted range.

The current best-selling flavors are frosted strawberry and brown sugar cinnamon. Other popular flavors include:

If you’re a vegan, can you eat Pop Tarts? Let’s find out…

The Answer is:  NO

What Are Pop-Tarts Made Of?

Why Are Pop-Tart Not Vegan?

Pop-Tarts with frosting are not vegan as different flavors have milk powder, eggs, and/or gelatin. On the other hand, flavors that do not have known animal products in them also contain non-vegan ingredients:

To combat the un-intentional endorsement of non-cruelty-free products, it is safer to stay away from Pop-Tarts.

Pop Tarts have been immensely successful ever since they were released. A much-needed breakfast snack, they have been in-demand for decades, adapting to market needs.

However – white sugar, palm kernel oil, and natural flavors are notoriously detrimental to conservation and animal rights. Not only does white sugar require animal bones for its color, but vegans are also skeptical that the natural flavoring in Pop-Tarts is plant and not animal-derived.

Furthermore, the palm kernel oil industry has contributed to deforestation – the permanent removal of animal habitat.

The above information proves that Pop-Tarts have animal ingredients in them and they are not suitable for vegans.

For more on Pop-Tarts, head to the Kellogg’s website:
https://www.kelloggs.com/en_US/brands/pop-tarts-consumer-brand.html