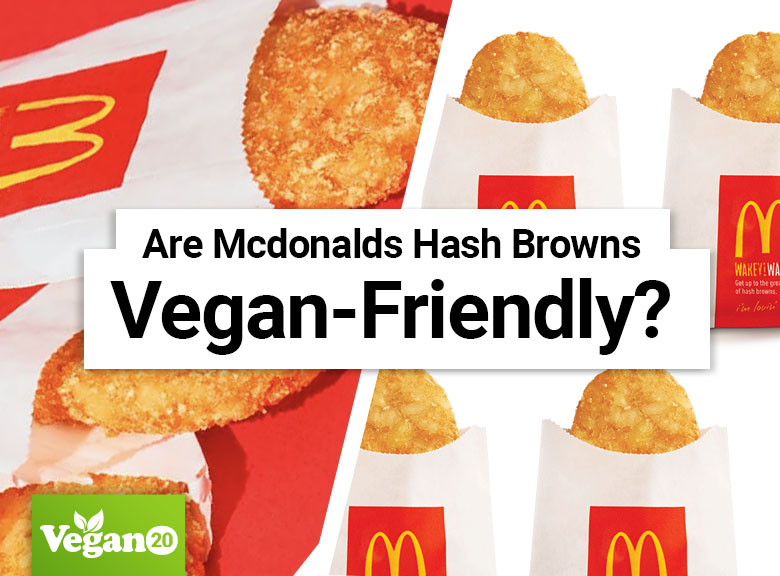 You may be wondering if McDonald’s Hash Browns are vegan-friendly.

McDonald’s Hash Browns are popular side dish served as part of the fast-food restaurant’s breakfast menu.

McDonald’s describes them as having a fluffy texture on the inside while being crispy on the outside. Unlike their fries which are diced, the hash browns are made from shredded potatoes. They are then pan-fried until they become the golden-brown goodness that the world knows and loves. But can they be loved by vegans? Continue reading to find out.

The Answer is: No

No, Unfortunately, hash browns are not vegan-friendly. They contain a few ingredients that are from animal sources. These ingredients include beef and milk.

What Are Mcdonald’s Hash Browns Made Out Of?

Mcdonald’s Hash Browns are made from the following ingredients:

Why Are McDonald’s Hash Browns Not Vegan-Friendly?

We get it if you’re confused. “How can animal-sourced products come from a potato?” Well, you’ll be surprised to know that a 2001 lawsuit against McDonald’s led the company to reveal in a statement that beef flavoring is actually added during the processing of the potatoes at the plant.

Milk, of course, is a clear animal-sourced ingredient and is not suitable for vegans to have.

Many argue that that “natural beef flavor” doesn’t actually contain meat. The process of creating the beef flavor starts off with beef, however by the time the processing is finished, only the flavor remains and not the beef. While this may be true, vegans are against animal cruelty. This means that despite there being no actual beef in the ingredient, the fact that an animal was harmed to create the ingredient presents an issue to the animal-loving community.

McDonald’s has constantly been the subject of  PETA’s posts as one of the major restaurant chains that allow the inhumane killing of animals. It might be consoling to the vegan community that in response to this, McDonald’s has made a commitment to use less cruel slaughter methods by 2024. We guess the vegan community has got some beef with McDonald’s since their potatoes have animal-sourced ingredients such as milk and beef.

It may not be a good idea to ring up an order of the side dish the next time you visit the restaurant. The good news is McDonald’s has confirmed that there will be a launch of plant-based burgers, called the McPlant, that are fit for vegans in 2021. So take heart, soon you too may be “lovin’ it” at McDonald’s after all!

For more information, check out the official McDonald’s website: