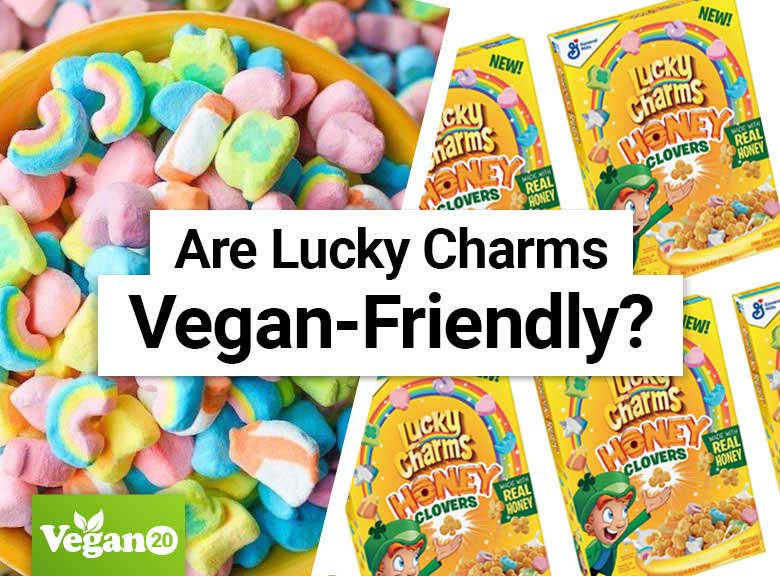 Do you want to know if Lucky Charms are vegan-friendly?

We understand. A cereal with such a wide variety of shapes and colors would make anyone curious. In fact, Lucky Charms was the first-ever cereal to include marshmallows in their boxes. It caught the attention of so many people over the years, that in 2018, it ranked number six on Kiplinger’s most popular breakfast cereals in America, beating the likes of Fruit Loops and Fruity Pebbles. But are they a magically delicious option for vegans? Continue reading to find out.

Unfortunately, we can’t recommend having a breakfast bowl filled with Lucky Charms. They are not free from animal sources nor are they animal cruelty-free.

What Are Lucky Charms Made Of?

Original Lucky Charms is made from the following ingredients:

Why Are Lucky Charms Bad for Vegans?

A few of the ingredients included in the leprechaun’s breakfast are taken from animals to improve the product’s taste and quality. Lucky Charms has gelatin and vitamin D3 as two of their ingredients. Medline Plus has advised that gelatin is made up of collagen from the joints of animals, as it helps with the cereal’s texture.

Vitamin D3 is also derived from animal sources. Lanolin, the oil from sheep’s wool, is extracted and is often used in cereals. Healthline guarantees that the sheep are not harmed because the wool is sheared before the oils are extracted.

Sadly, this doesn’t take Lucky Charms off the hook for animal cruelty. Another ingredient in Lucky Charms that will be of concern to the vegan community is the Red40 dye. This is one of the artificial colors that makes the cereal vibrant and attractive.

FDA has regulated that food containing artificial colors like Red40, must be tested for it to be approved for human consumption. Although Red40 isn’t made from animal sources, Healthline has confirmed that it is tested on animals that are later euthanized. So, on top of not being vegan-friendly, Lucky Charms are also not animal cruelty-free.

We went searching for the end of the rainbow but found no pot of gold for vegans. Lucky Charms are not vegan-friendly because of the gelatin and vitamin D3 that are included in their ingredients. The dye used doesn’t spare animals from cruelty either. Take heart though, your breakfast can still be magical with other vegan-friendly foods that we write about!