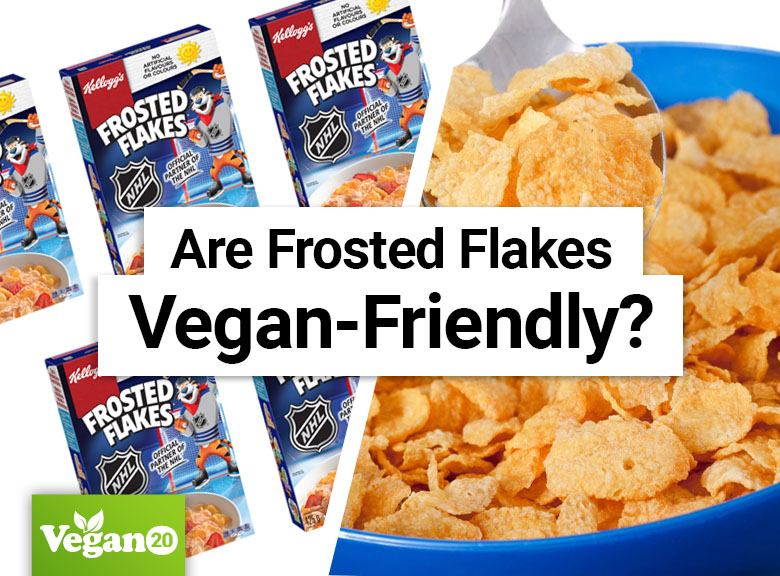 What better way to start your day, than with a delicious bowl of cereal? How about some Frosted Flakes? While at least 8.5 million people have ten, or more, portions of this cereal per week, we’re sure you’d like to know how “grrrrreat” they really are for those on a vegan diet.

Kellogg’s uses Frosted Flakes to advocate for being healthy, as it is the only cereal brand that promotes an active, athletic lifestyle across all its platforms. But can it measure up to the requirements of the vegan diet? Continue reading to find out.

Unfortunately, vegans will have to pass up that box of sweet crunchies. Frosted Flakes are not 100% guaranteed to be vegan-friendly.

What is Frosted Flakes made out of?

Why are Frosted Flakes cereal not vegan?

Food Data Central lists vitamin D3 as one of the ingredients found in the cereal. Frosted Flakes aren’t good on a vegan diet, because vitamin D3 is known to be made from animal sources. The vitamin can be made from either animal sources such as lanolin, or from a vegan-friendly source called lichen. Cereals, however, are usually made from lanolin, which is the oil produced by sheep’s skin to protect its wool.

Kellogg’s have stated in the frequently asked questions section on their official website, that the vitamin D3 contained in their products, comes from animal sources. We must let you know, though, that despite this, many vegans still eat this breakfast item, as the amount of D3 present in 100 grams of Frosties, comes up to about 0.00000345%. If you’re a strictly vegan dieter though, this is enough to turn it down.

The company has promised that in efforts to be environmentally friendly, the ingredients of their products are sourced responsibly. Healthline describes the process of extracting the oil from sheep as harmless, as the sheep is first sheared before its wool is processed through a machine that extracts the oil from other chemicals.

Kellogg’s have been making great strides in environmental sustainability, as they have reported that their packaging is currently 76% recyclable. They have even moved towards making more of their products plant-based and vegan-friendly.

However, Frosted Flakes are not among the products that are 100% guaranteed vegan. For that we say, if you are strictly vegan, it’s best to give another breakfast item a try!