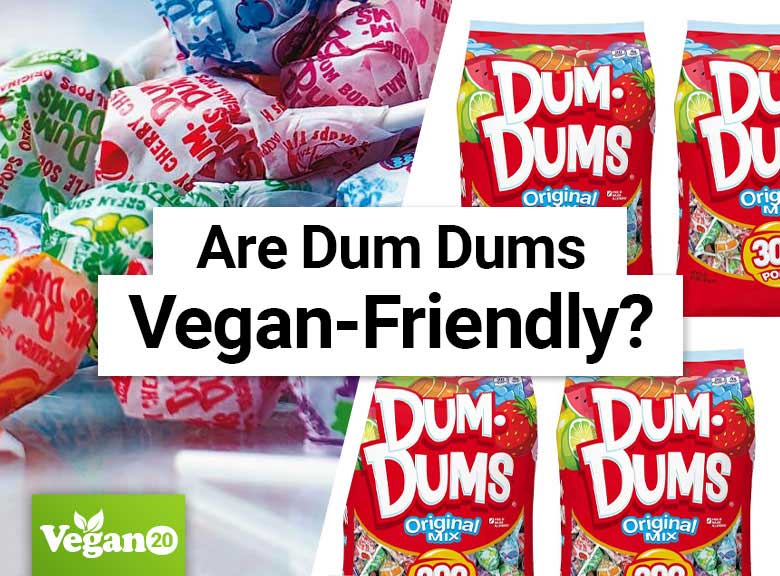 Would you like to know if Dum Dums are vegan-friendly?

Spangler Candy makes 12 million lollipops per day. This is how you know that it is quite popular. Dum Dums are one of the most recognizable candy brands in America. They are normally labeled as give-away treats. Many businesses and schools will include Dum Dums candy in their give-aways.

Some of the most popular flavors include:

So with all the craze about the lollipop, we know you’re wondering, “Are Dum Dums vegan-friendly?” Continue reading to find out.

The answer is, yes! If you’re vegan, you can join the Dum Dum bandwagon. Dum Dum’s candy does not contain ingredients that come from animal sources.

What Are Dum Dum’s Made Of?

Dum Dums are made from the following ingredients:

Why Are Dum Dums Vegan-Friendly?

Vegans tend to get concerned when a product has sugar listed as one of the ingredients. This is because oftentimes, candy companies will use bone char to whiten the sugar. Don’t worry, bone char is not mixed with the sugar. But it is used as a part of the bleaching process which means the char comes in contact with it. It is enough for some vegans to decline partaking in the product while others consider it to be okay.

Another ingredient in Dum Dums that concerns some vegans is artificial coloring. Dum Dums use Red40 and Yellow5 to give their candy its attractive colors. These artificial colors have to be FDA approved before they can be used in food and this means that tests are done on animals to ensure their safety for humans. This goes against some vegans’ values of protecting animals from cruelty. If you’re a vegan with these values, then this candy may not be right for you.

Dum Dums are vegan-friendly in that they are not made with animal products in the ingredients. However, some ingredients are used that cause cruelty to animals. If you’re the kind of vegan that doesn’t have a problem with animal testing then go ahead and have a Dum Dum.

For more information on Dum Dum’s head over to: https://www.dumdumpops.com